Let the Story Be Told

The Vietnam War was often a war of small-unit actions, not the large, pitched battles that Hollywood is so fond of producing. And it was often the U.S. Army’s Long Range Patrols that bore the brunt of these actions. By now, through individual accounts and the formal recognition of these units’ value, the valor of the LRRPs in Southeast Asia has been honored.

Ed Emanuel’s SOUL PATROL (A Presidio Mass Market Original; August 1, 2003) is an exciting addition to the growing list of outstanding long range patrol autobiographies. It is also one of the most unique of these works because it is the first written by an African American member of a long range patrol company, a company where the only color was “tiger stripe” and the racial divides of the sixties and seventies took a back seat to getting the job done.

When Ed Emanuel was handpicked for the first African American special operations LRRP team in Vietnam, he knew his six-man team couldn’t have asked for a tougher proving ground than Cu Chi in the summer of 1968. Home to the largest Viet Cong tunnel complex in Vietnam, Cu Chi was the deadly heart of the enemy’s stronghold in Tay Ninh Province.

Team 2/6 of Company F, 51st Infantry, was quickly dubbed the Soul Patrol, a unsolicited label that belied the true depth of their courage. Stark and compelling, Emanuel’s account provides an unforgettable look at the horror and the heroism that became the daily fare of LRRPs in Vietnam. Every mission was a tightrope walk between life and death as Emanuel’s team penetrated NVA bases, sidestepped lethal booby traps, or found themselves ambushed and forced to fight their way back to the LZ to survive. Emanuel’s gripping memoir is an enduring testament to the valor of all American LRRPs, who courageously risked their lives so that others might be free.

The riveting true story of the first African-American LRRP team in Vietnam.

Ed Emanuel was a Lurp/Ranger in the Vietnam War. He lives in Los Angeles, California, where he has worked for over thirty years in the film and television industry. He is the accomplished producer and director of several documentaries. 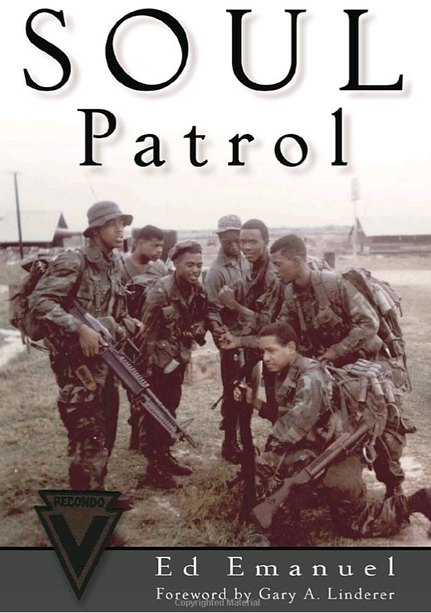 Don't miss out on our gift bundle of Soul Patrol book, Challenge coin and Film documentary!

Purchase The Book
View on Mobile